“Keep on going and the chances are you will stumble on something, perhaps when you are least expecting it. I have never heard of anyone stumbling on something sitting down.”
- Charles F. Kettering

My urge to hit the road, to calm my wanderlust, has inspired a whole new goal this summer. For at least one day every week for the next few months I'm going to explore Nova Scotia's beautiful, rugged coastline in search of Ocean Playground stories to paint. I'll pack my plein-air easel kit with me on overnight camping excursions, my sketchbook, and a back-up camera along with lots of extra batteries.

This week I began my Field Trip series exploring the coastline further up the eastern shore, on a stretch called Marine Drive. I covered over 250 km return with many side road jaunts along the way, and took 295 photos. Nova Scotia looks pretty small compared to the rest of Canada, but in a day I only drove as far as Spry Bay so I could make it home for dinner. 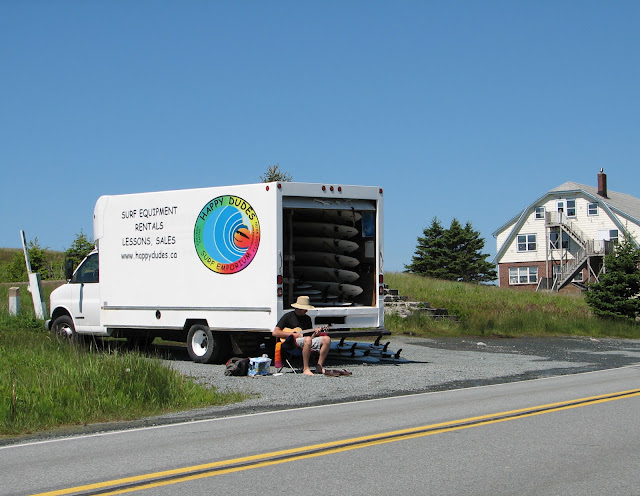 Heading east on Lawrencetown Road, you'll almost always pass Happy Dude's surf rental van. This guy has a baritone ukulele just like mine, and passes the days writing new songs, reading, and laying out catching some sun rays. He's always up for company so stop and say hello. He might just serenade you with a new tune! 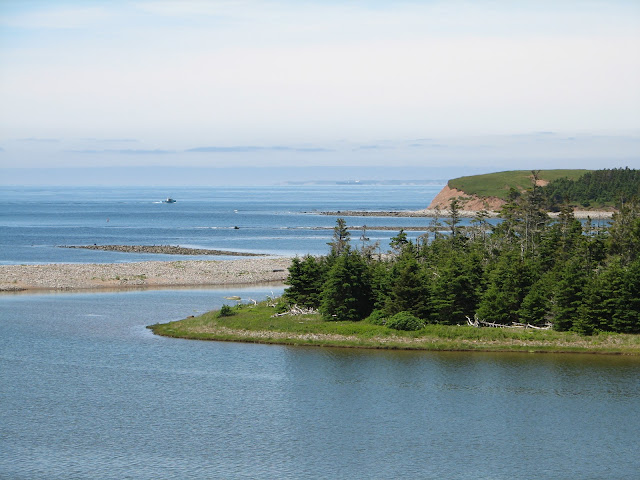 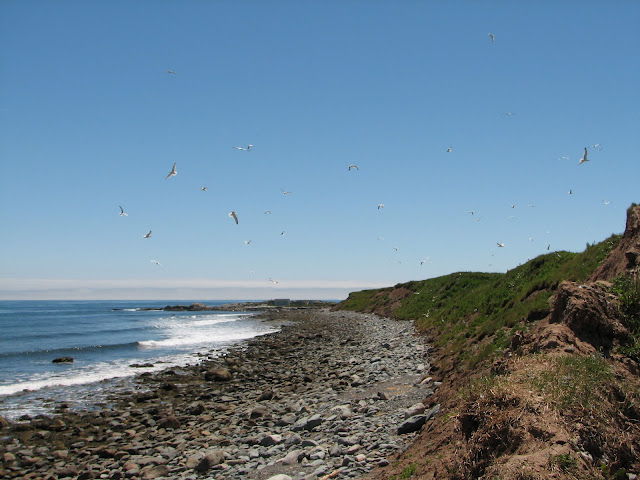 I know the real name, but let's just call this Gull Sh*t Island. But really, the seagulls were mesmerizing. I stood there so long watching them soar and call out to each other, that I forgot the tide was starting to roll in. I had only just started my day, so decided to turn back instead of continue hiking the headland. I'll come back another day. 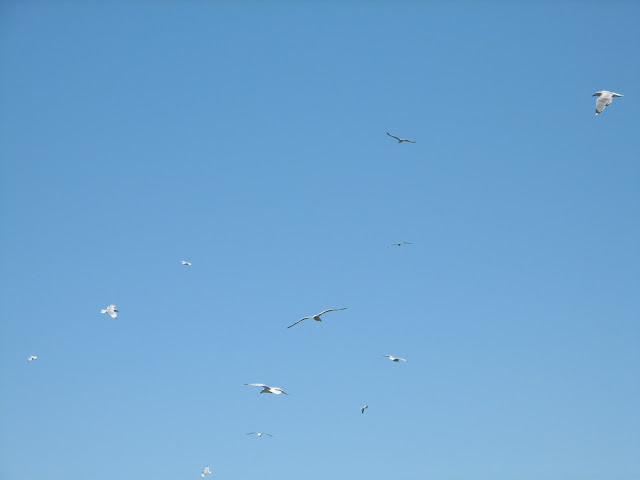 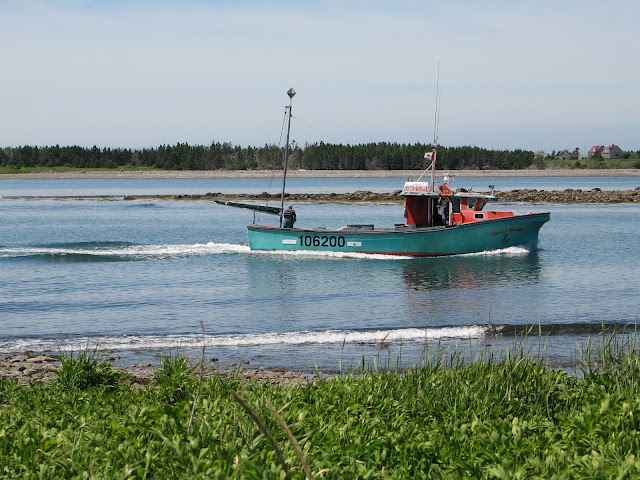 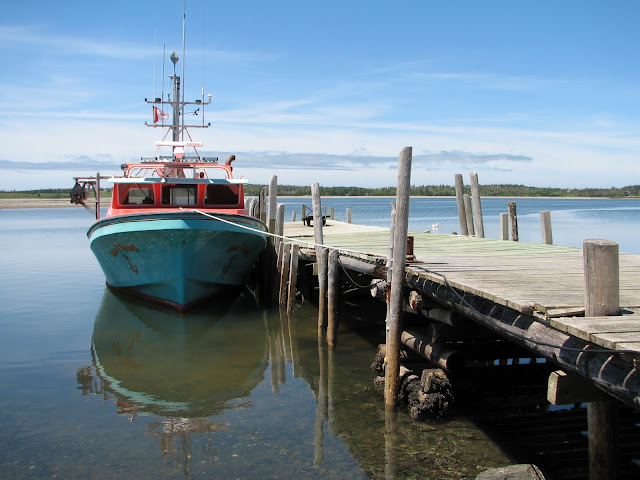 I chatted a while with Jessie as she set out to sell the morning's catch brought in just moments ago. They're $6/lb, straight from the fisherman. The best lobster you'll ever find tastes even better when it's bought off the dock. Head out to Fisherman's Reserve and look for the colourful Cape Island boat! 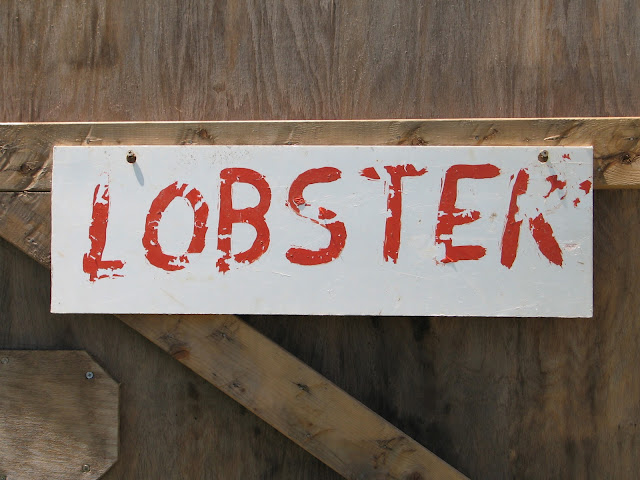 This seagull perched on a beach stone at Seaforth Cove looked very contemplative with the Hope for Wildlife sign in the distance. 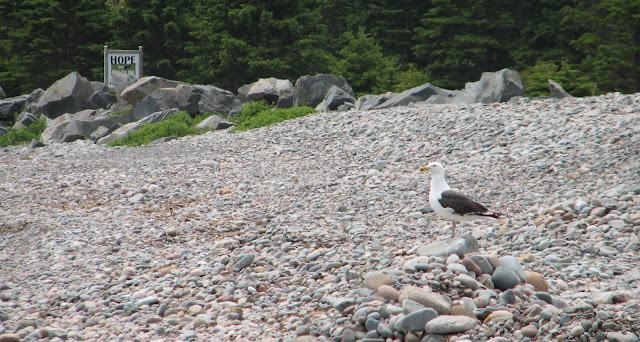 I grabbed a juicy burger at Heather & Theresa's Country Store as I headed up the coast, and couldn't resist buying some nostalgic Pop Rocks to toss back as I cranked Joel Plaskett's new album, Scrappy Happiness, a perfect road-tripping album. In Musquodoboit Harbour, I stopped at The Tourist Trap to browse around and bought a local Puddle Jump coffee to go. 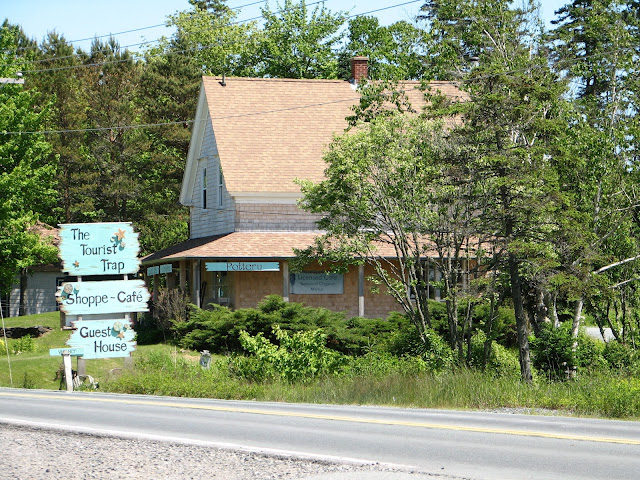 I used to live in East Jeddore, and loved the drive then as much as I love it where I live now in Lawrencetown. I decided to visit our old house for old time's sake... 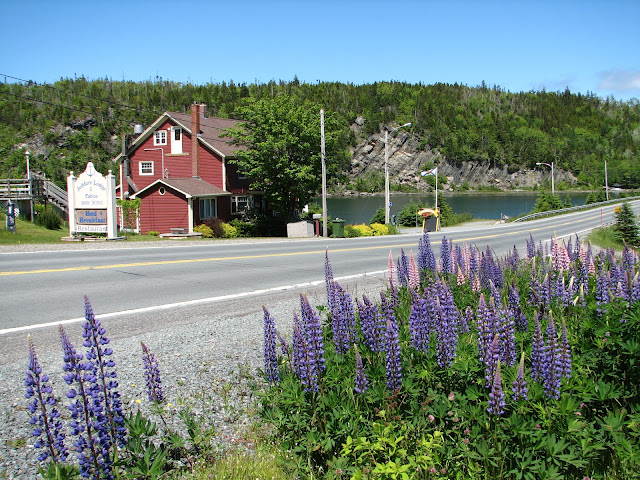 It's funny how just about every dock has a Canada Flag blowing proudly in the breeze. Don't get me wrong, Canadians are very patriotic about our country and culture, but we tend to be pretty chill about it, rather than yell from the rooftops. So it is nice to see these flags along the coast. Maybe they're set out just in case pirates get lost in the maze of waterways and islands along the rugged coastline. We wouldn't want them to get confused as to where they landed ;) 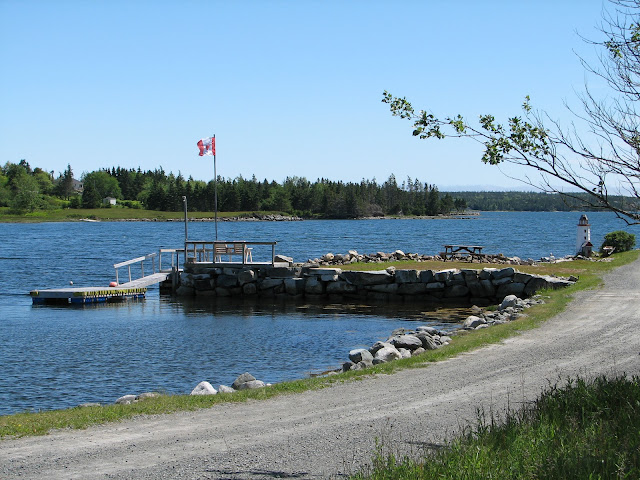 In the photo above, to the left in the background is the grassy backyard of the old Victorian house we rented for most of a year back in 1997. 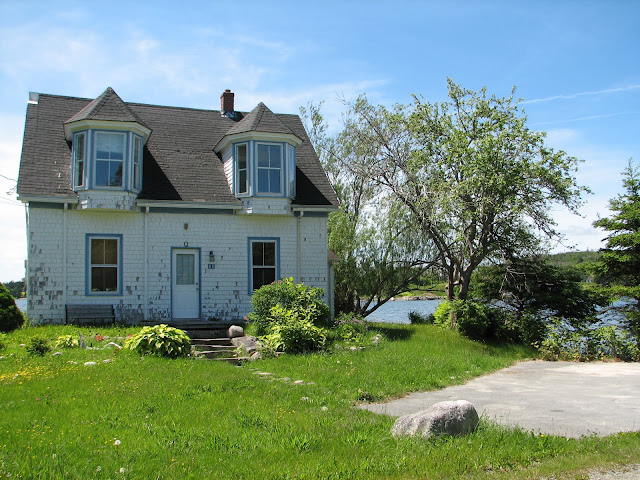 And this was our home that year. It's kind of sad how dilapidated it looks now. The paint is chipping off and the grass is overgrown, and the house looked deserted. Our old dog Daizy was just a couple years old when we moved back to Nova Scotia. She loved it here! She would run laps around the yard and throw sticks for herself and catch them. I would pass my days chopping firewood and making bread. Stefan found meagre work in forestry. We came from planting trees out west, to cutting them down out east. I couldn't get a job so I went back to school! That's when we moved to Dartmouth. It's amazing how much things have changed. 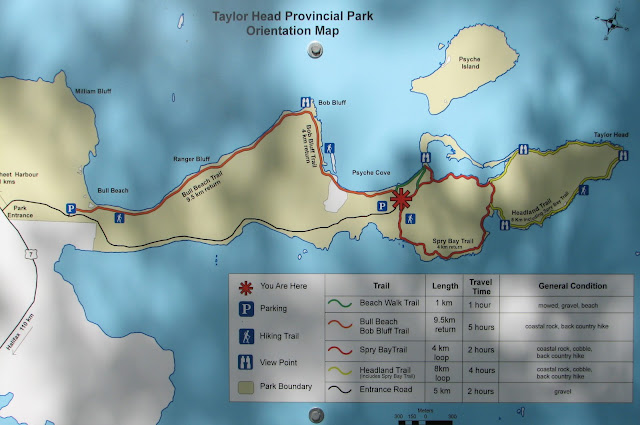 As I continue on my way I pass Clam Harbour Beach. Every August is the famous Sand Castle Building Contest, which is always a "must attend" full day event! This year it will be on August 19th. Next I head to Taylor Head Provincial Park. Taylor Head Beach Walk trail is something to be experienced with your sandals off and toes free! The sand here is like fine white powder. 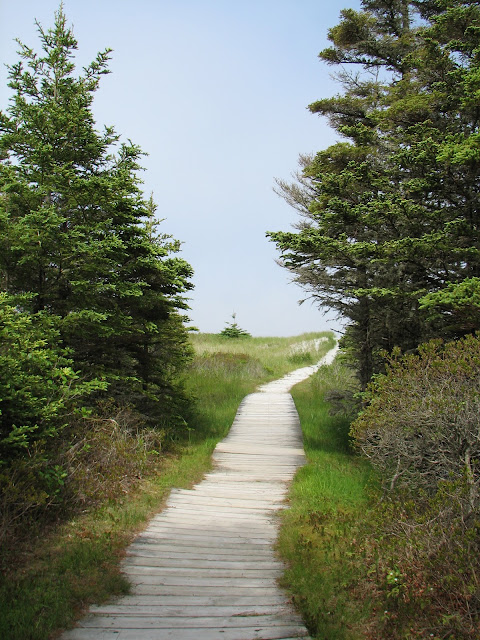 Next week I'm going to take some small mason jars with me and collect and label sand from every beach I visit. The sand from one beach to the next is so different, it's quite remarkable! 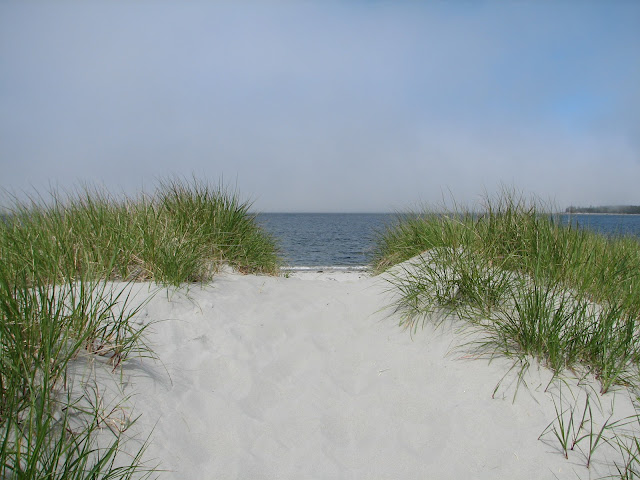 I was moved to find this simple display of love in the sand... 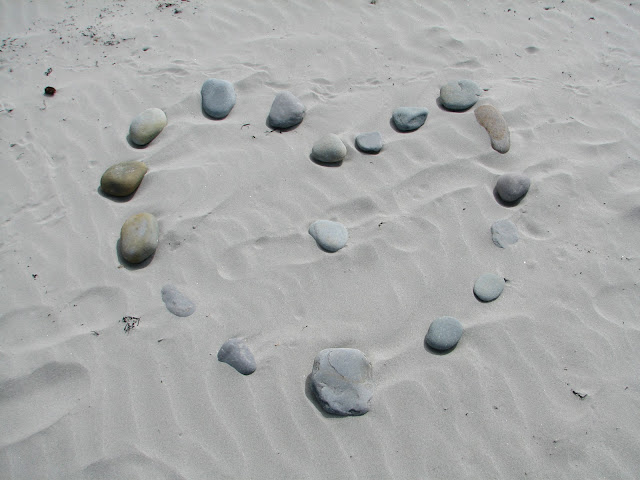 ...followed by a majestic Inukshuk overlooking the sea. 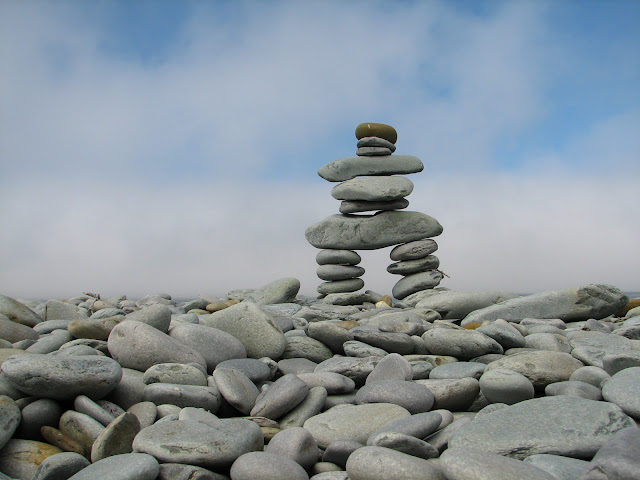 Heading back home, I pass this scene and spun around to enjoy it for a few moments. The sun was warm, the breeze was gentle, and the fog was rolling in. I imagined sitting out on this dock on a clear starry night with a glass of wine and a few friends :) 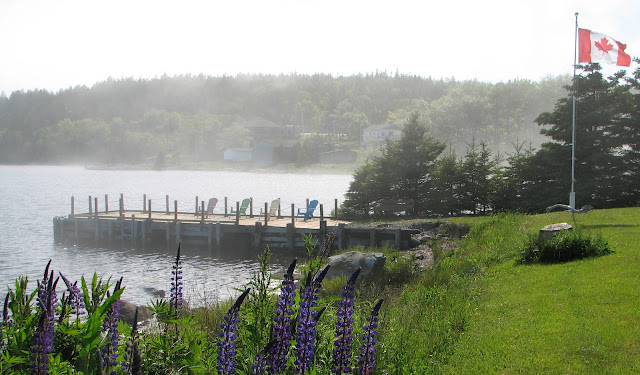 I headed down East Petpeswick Road in Musquodoboit Harbour towards Martinique Beach, one of the best long boarding beaches on the shore. The waves were pretty tiny, but that didn't deter these beach-goers from enjoying a suited-up swim. In a few more weeks the water will be much warmer! 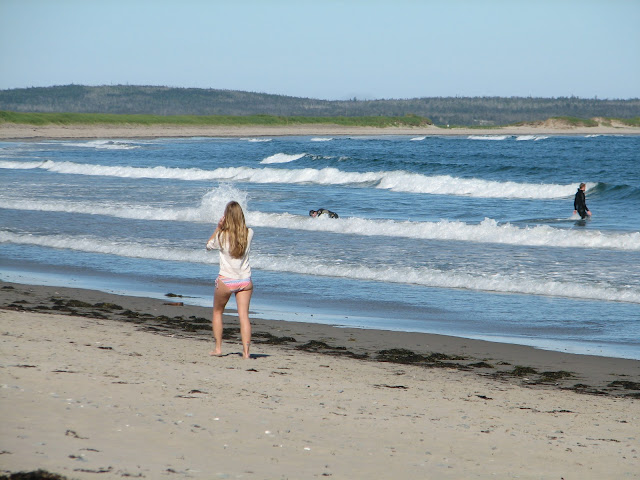 Back in Musquodoboit, I was so warm from a full day in the sun, I stopped at the famous Polar Bear Express for an orange pineapple ice cream. YUM! 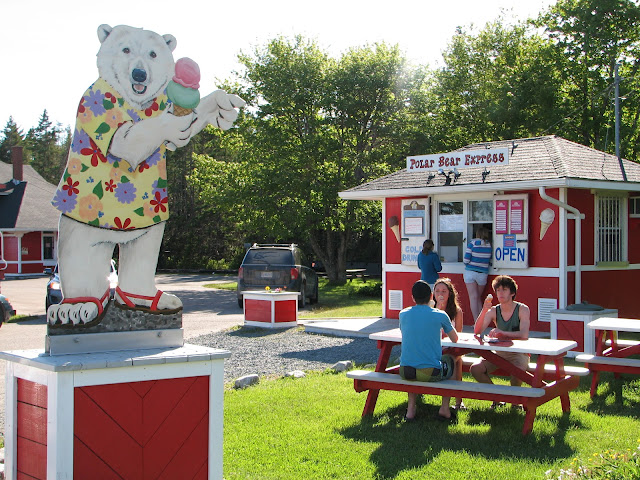 We used to treat ourselves to the best fish and chips on the shore here at Harbour Fish 'N' Fries, and still do every time we make the drive out. This couple was so sweet, flirting and giggling like they were 16 again, on the back of the ol' pick-up truck. They said every 2nd Wednesday at 4:30 all the antique car collectors gather here to hang out. I'm going to try and visit again next Wednesday evening! Almost home! There was a nice little wave at Seaforth Cove. This sea kayaker had it all to himself! 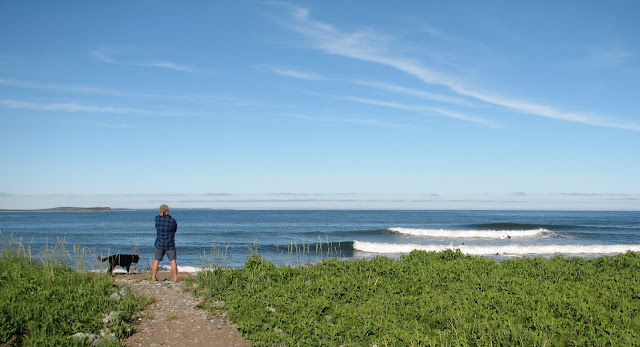 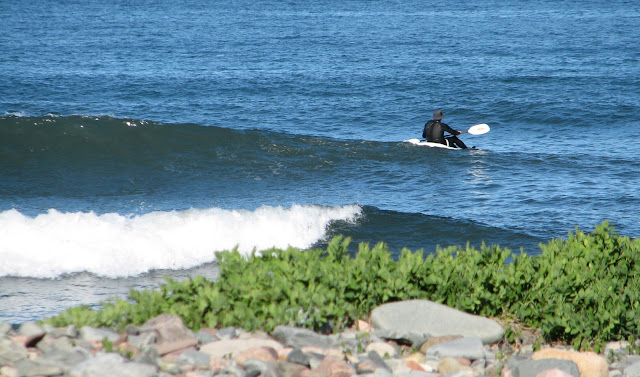 I'm really looking forward to next week's Field Trip. I haven't decided which part of the coast to explore next... North or South? I would love to hear where your favourite places to visit are in Nova Scotia. Drop me a line anytime... daina@artbydaina.com OR check out my Facebook art Page and join in the conversation there.
Posted by Daina Scarola at Thursday, June 14, 2012