His musical story-telling and catchy tunes have been inspiring my creativity for years. Countless paintings have grown one stroke at a time to Joel Plaskett's albums, sometimes set on replay, always sung to as I paint. I think my favourite albums are Three and Ashtray Rock, but his talent is incredible in that EVERY song is great on EVERY album. This is unheard of. Get the latest single You're Mine, or go nuts and buy them all. You will be glad you did! Have a listen to them here.
In December, Stefan and I were invited to a friend's house for some holiday cheer among a small group of family and friends, when Joel joined us with one of his special guitars in hand, ready to hang out and play a few tunes. We had such a great evening listening to his stories, chatting life, and his upcoming plans for his latest album, Scrappy Happiness. 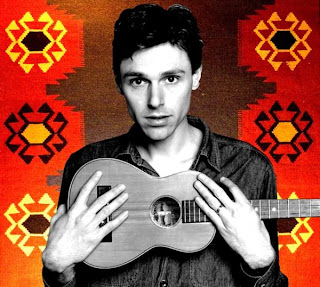 Starting this week, Joel is releasing one studio recording per week from his new album for 10 weeks, starting with "You're Mine" (visit CBC Radio 2 to hear all about it!). Be sure to tune in at 5:15 on CBC Radio 1! Each week each new tune is available for purchase on the iTunes Store, and the full CD release will be available on March 27th. He'll be setting off on a Canadian tour with his Emergency band on April 27th. For more info check out his website at www.joelplaskett.com, his Facebook page, and Twitter.

Joel played "You're Mine" for us that night before Christmas. I shot a little video of it for him, and he liked the "work in progress vibe" enough to include it in his promo video for his new weekly release project. Check out the full video I shot here...

See his full promo video on YouTube here.
...and feel free to sing along with the lyrics!
You're Mine